Previous Next
Overheard and overwhelmed

By Bob Hulteen, Director of Communications and Stewardship

Running out the door of my house to catch the bus, I overheard a rather intimate conversation between a father and daughter as he accompanied her to the school just two blocks east. “That’s what being homeless means, honey,” he said. “We don’t have a house.”

A little disheveled, this father and daughter slowly ambled toward the school. The daughter appeared tired and cold … and hopefully she would welcome the transition from survival to schoolwork. Seemingly as obvious, the dad was trying to prepare her for the lessons she would learn inside a warm building – probably hoping beyond hope that those lessons would be more memorable than the ones of spending the night in a city bus or under a bridge or at a shelter.

I didn’t plan to listen to this conversation. And, truthfully, I didn’t hear too much of it. I didn’t approach the pair, inhibited by my concern that my attention would be embarrassing to them. I was more of a voyeur, I suppose. But, I did let the conversation sink in; it reminded me that not everyone’s life is just like mine.

I HAD JUST SPENT the previous three days with about 100 rostered leaders at the Bishop’s Theological Conference under the theme “Real Presence: With Our Neighbors, In Our Neighborhoods.” From beginning to end of this retreat, the most discussed way to be “really present” with people is to listen to their stories. 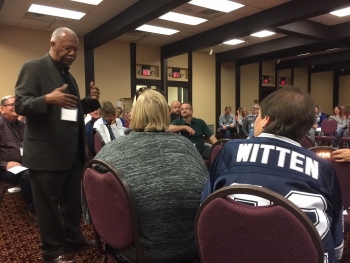 Jesus showed real presence by being a curious listener. He would ask questions, listen to answers, and then respond. But his response was normally based on transforming the assumed paradigm from a presenting issue to the deeper problem. He challenged the assumptions, often embarrassing the powers that be through questions with no good answers. Cornered, the leaders often had to measure their response carefully.

The day after the Bishop’s Theological Conference, I spent some time with West Metro candidates for the state legislature. I made a case that public policy changes could address several situations wherein people with less wealth and more financial vulnerability are denied access to participation in alternative energy programs. One candidate responded by stating that churches should “provide charity to needy individuals.”

From beginning to end of this retreat, the most discussed way to be “really present” with people is to listen to their stories.

Clearly, this candidate wanted to deal honorably with the presenting problem. Let’s find a way to get these people access, she imagined. 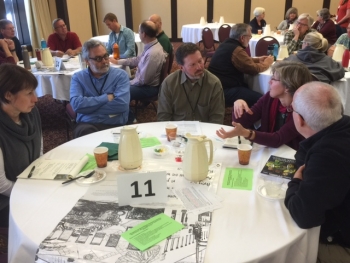 But, I don’t think she was willing to hear the way Jesus hears – diving into the deeper waters. He challenged the assumptions, so we can too. He found systemic solutions to structural problems so that marginalized people could participate fully and with dignity in civil society, so we can too.

I don’t think my only response to the father and daughter walking to school should be to invite them to move in with me. (Though, I do agree that might be a good initial action on my part.) Wouldn’t it be wonderful to identify the barriers that are keeping this dad and daughter from having a place to call home? Wouldn’t it be better to address those barriers for them and for all those like them who are on the streets?