Previous Next
Drink and Swear

By Bob Hulteen, Director of Communications and Stewardship

Since I am now an ardent advocate of nonviolence, many readers who know me might be surprised to find out that I was often in fist fights during the three-block walk home from my elementary school. (It might be more accurate to say that I often lost fist fights. Perhaps that was part of the reason to choose nonviolence.)

But, it wasn’t my fault. It was Rafe, the guy who lived kitty-corner from my backyard. As early as third grade, we had some deep disagreements over such things as favorite baseball players and local school mascots. One early fight – perhaps the first – occurred when the Presbyterian sixth-grader walking with us opined that the difference between Catholics (which Rafe was) and Lutherans (that would be me) was that Catholics could drink and swear and Lutherans could not. Such were the passions of youth. We fought because we were of different clans. 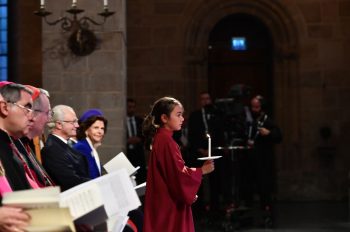 door, I found myself sitting in a classroom at Luther Seminary, watching the live video feed from Lund, Sweden, of Bishop Munib Younan, the president of the Lutheran World Federation and the bishop of the Evangelical Lutheran Church of Jordan and the Holy Land, and the Bishop of Rome, also known as Pope Francis, sign a joint declaration pledging to improve relations through on-going dialogue and to be agents of healing throughout God’s created order.

As I watched the service and the signing, I was less captivated by the words than the optics. The musical choices – especially the voices of the global choir – were stunning. The visual commitment to global expression was very impressive. And, the high point for me was the slow procession of five young people each lighting a candle for the five commitments to on-going connection between the Roman Catholic and Lutheran World Federation judicatory bodies.

The joint commitment to common, on-going humanitarian and peacemaking efforts is a good starting point toward bridging the schism that has defined the last 500 years.

The joint commitment to common, on-going humanitarian and peacemaking efforts is a good starting point toward bridging the schism that has defined the last 500 years. Unfortunately, the day after this historic event, we were reminded of fissures that remain as the Pope declared that women would never be priests within the Catholic communion. (Of course, having only men on the altar at the service and signing ceremony could have been taken as a foretaste of the announcement to come.)

Despite tangible excitement for this unique service of commitment to staying in relationship, differences remain. The dialogue will take gifted leaders willing to share openly and humbly together. A path for continued reconciliation lies before us. 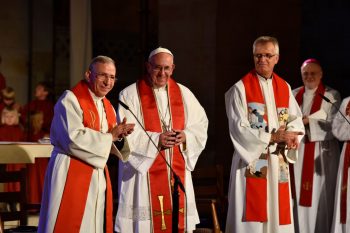 So, what do you think about Lutherans and Catholics worldwide finding points of agreement and working to seek deepening connection? I’d love to hear what you think. Maybe even over a beer … but watch your language.