O Holy One, stirring Spirit of Pentecost, we give thanks for the gentle breeze, the rushing wind of storms, the wind that carries seeds, and the wind that powers electricity. Help us to steward these gifts of wind and air, and all your good creation.

Lord in your mercy, … hear our prayer.

As assisting minister at Calvary Lutheran Church this Sunday, I offered the prayer petition above. The Third Person of the Trinity harbors a multitude of images and richness of imagination – ephemeral and mysterious, yet incarnate in wind and breath. And, of course, this Spirit is ever powerful and provocative in her stirrings. 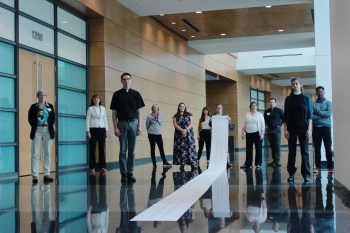 Clergy and lay leaders deliver a petition in the Minnesota Senate Office Building.

I find myself filled with the same wonder and invigoration as I felt as a child when my family would wander over to the park on a particularly windy day to fly kites. After the running start, the moment a gust of wind would take the kite soaring up was a striking one. It left me holding tightly to the string, filled with both excitement and fear (lest the kite come crashing down), as it blew higher. Holding tightly with both hands to the end of the line, I’d pull hard, but more often be pulled myself, lurching forward or sideways, always anticipating, but never too successfully, where the wind might turn next.

“The rushing, transformative Spirit cannot leave things sitting still – she immediately propels the disciples out to speak in the public square.”

Wind is certainly not static, and neither is this Holy Spirit of ours (if we can even lay claim to her). This dynamic shows up powerfully in the Pentecost story of Acts. The rushing, transformative Spirit cannot leave things sitting still – she immediately propels the disciples out to speak in the public square. The rushing wind “filled the entire house where they were sitting” and then suddenly, with no explanation or literary transition, they disciples were no longer in an upper room but out on the street corner, proclaiming loudly and in every language about God’s deeds of power.

Doesn’t this ask of us the same thing today? How does the Spirit drag us out into the public square, with a prophetic word of hope and gospel?

YESTERDAY, ON THE LAST DAY OF the 2018 legislative session, a small group of EcoFaith advocates stood outside the Senate Office Building at the Minnesota State Capitol. One held an armful of paper, a long printed copy of over 1,100 signatures from clergy and lay members of the faith community in Minnesota, urging our policy makers to adopt a higher Renewable Energy Standard (RES) – 50% by 2030. 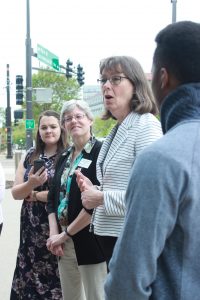 Standing at the intersection of faith and life

We delivered the open letter at the tail end of session after seeing no traction – the bill was not even granted a hearing. It was the last day of session, but all the formal business had been closed for the year and sent to the Governor’s desk at midnight. Yet there we were, dedicated disciples representing faith communities far and near, filled with a Spirit-ed boldness to speak visions and dreams for God’s creation on the street corner of Park and University Avenue West.

In the deserted halls of the Senate offices, we boldly charged that the legislature was doing as much on clean energy when the building was empty as when occupied. Once outside, we planted a stake in the ground on renewable energy justice – stating that we are not going away, but would continue to stand up as people of faith. This was a moment of the Spirit’s blowing among our congregational leaders, who refused to be discouraged and chose instead to be powerful.

May we not lose the feeling of the wind’s strong pull on the end of the kite string. May the Spirit, in all her force and unpredictability, pull us on, draw us out, and embolden us in our ministry.