And the youth shall lead them

Previous Next
And the youth shall lead them

This past August, 25 elementary-aged students from three Minneapolis congregations came together to spend a week building community. Literally.

Equipped with stacks of cardboard boxes, duct tape, markers, paper, and anything else they could get their hands on, the students carefully constructed an entire city on the floor of University Lutheran Church of Hope’s (ULCH) fellowship hall. They voted to name their creation Redfull City. 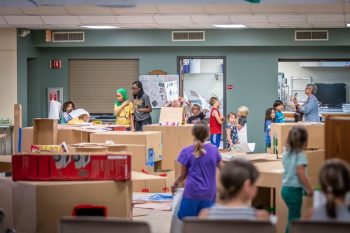 “The first step was to do some deep, holy listening to one another.”

While they worked, we talked about God’s desire (and the synod’s mission statement) for all to “live in just and healthy neighborhoods.” As it turned out, though, just like our own neighborhoods, Redfull City was facing some systemic inequities. Some neighborhoods of the city were cut off from resources by natural and human-made barriers, and when disaster struck Redfull City shortly into our week together, those same neighborhoods were disproportionately impacted.

After a field trip to the Mississippi River, students returned to Redfull City to find that the rapid development of their city had a destructive impact on the Redfull River, which ran through the heart of the city. Sadly, the river had become polluted, animals were dying, and some neighbors were left without potable water in their homes. Campers were devastated by this problem, and even more upset to learn that their actions, even though they were unaware of the impacts, had caused the situation. But rather than becoming defensive, the residents of Redfull were ready to learn.

SINCE SOME RESIDENTS of the city were being more impacted than others, the first step was to do some deep, holy listening to one another. Nick Tangen, minister of faith in community at ULCH, shared the story of Nehemiah listening closely to those in his community to learn about what was important to them and what forces were preventing them from living in a just and healthy neighborhood.

Then the campers learned everyone’s favorite community organizing tool: one on ones! They paired off and asked one another bold questions about what was important to them about the community they built together, what the health of the river meant to them, and how they were suffering as a result of the river’s degradation.

“Nick Tangen shared the story of Nehemiah listening closely to those in his community to learn about what was important to them and what forces were preventing them from living in a just and healthy neighborhood.”

Ecumenical Water Initiative leader Anthony Galloway and eco-faith leader Allyson Green encouraged residents by leading the chant: “Don’t just pray about it, be about it!” They taught the community about the importance of buffer zones to protect the river from nearby development. 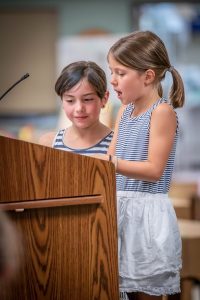 In order to secure buffer zones for Redfull City, however, residents would have to meet with their state senator in order to request her support. As it turns out, Redfull City is in Sen. Kari Dziedzik’s district (who knew?!) and campers got to work preparing for their meeting. Residents learned about power analysis – how we display the power we have as a community in relationship to those with power over policies.

Petitions were signed. Chants were learned. Speakers were prepped. Prayers were written. Murals were created. And then, the day of the big meeting arrived.

It wasn’t easy. Residents shared heartfelt stories about Redfull city and the life they envisioned there together. They shared with the senator about how their cultural or theological identities call them into deep care for creation, and for water in particular. They were brave – more brave than many adults would be speaking truth to power. And ultimately, they were successful. Redfull City was able to create buffer zones to protect their beautiful river.

I’VE BEEN THINKING ABOUT each of these campers this week as I’ve followed along with the Global Climate Strike, led by students worldwide. I’m not sure whether the campers from Redfull City will become youth activists or organizers like the students organizing the strike. I’m confident, though, that they left Redfull City knowing that this is the call of the gospel, the work of the church; and we need their leadership, vision, and courage.

How is your congregation following the lead of young people?