Previous Next
Football: It isn’t fair

Are you tired of hearing and reading and talking about the demise of the church? Well, let’s talk about football instead.

I like watching football. I’ve never played it — well, I guess I played a couple games of flag football at seminary. I’m also in two fantasy football leagues. One includes my family. (I have the most total points, but I’m 5-4 — life isn’t fair.) The other one involves my colleagues at work. (I’m in eighth out of ten places; Jeni sits on top of the leader board, despite her nonchalant attitude to the exciting world of fantasy football — again, life is not fair.)

What a great weekend for Minnesota football. The University of Minnesota’s Golden Gopher football team defeated the fourth-ranked Penn State Nittany Lions on Saturday. (What’s a Nittany?) It’s the first time in ages the Gophers beat a ranked team; the squad is still undefeated late in the season and has garnered national media attention. The game on Saturday was well-played by both teams; the lead went back and forth; and I have to remind myself that it was played by talented young men in their teens and early twenties. Another rare occurrence for U of M football: The students stormed the field after the clock hit 0:00.

“I have to remind myself that the game was played by talented young men in their teens and early twenties.”

Then Sunday night the Minnesota Vikings won a game they often don’t win — on the road, against a team with a good record. This game was filled with acrobatic catches by both teams. Another see-saw battle, with a diving pass deflection by “our” middle linebacker that sealed the game for a Vikings win.

But I struggle with my football-watching hobby. It’s a violent sport. Players I grew up watching — in the pros, even a college classmate — suffer from brain injuries, sometimes causing their early death.

AND THEN THE Sunday New York Times included an investigative report on … wait for it … the demise of football — even in Texas! The article went into detail about what the powers-that-be are doing to try to reverse the trend. As an example, the Times printed a 2008 team picture of the high school football team from Maiden, North Carolina, next to its 2019 team photo. 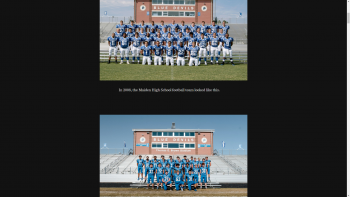 From the Times article: “Football has long been a fundamental part of the American identity, and it likely will be for years to come. But it has become mired in controversy over safety, and it has to compete harder each year with the popularity of other sports. In Maiden and elsewhere, the joyous Friday nights and Saturday afternoons remain, but they are different now.”

I remembered the 2016 editorial by Lord of Life in Maple Grove’s Pastor Peter Geisendorfer-Lindgren comparing the cathedrals of century ago (e.g., Central Lutheran in Minneapolis) and the cathedrals today (e.g., US Bank Stadium). “Sports and religion have switched places in American culture,” observes Pastor Peter. “Is that OK?”

“I have to admit that, when I saw the side-by-side pictures of that high school football team, I couldn’t help but think of side-by-side confirmation pictures in church fellowship halls and basements.”

But this New York Times article shows up with facts and figures about football in decline in the U.S. Does this mean that American football might just be a phase?

I have to admit that, when I saw the side-by-side pictures of that high school football team, I couldn’t help but think of side-by-side confirmation pictures in church fellowship halls and basements.

But keep this in mind — the apostle Paul started around 14 churches 2,000 years ago. Where are they now?

Thanks to the gift of the Holy Spirit, somehow we feeble faithful Christians have figured out how to pass on the faith to the next generation.

Keep up your good work, you followers of Jesus, and keep the faith, oh readers of churchy blogs!