Previous Next
A prodigal welcome

“We say we’re bondage to sin and can’t free ourselves,” says Ed Treat, the pastor of Transfiguration Lutheran Church in Bloomington. “Addiction is anything that you do that is hurtful, you know, and you keep doing it.” 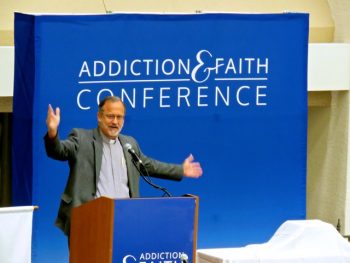 Pastor Ed Treat at the 2018 Addiction and Faith Conference.

Treat understands what it means to be in bondage. A recovering alcoholic, he is also the head of the Fellowship of Recovering Lutheran Clergy (FRLC), a pan-Lutheran support network of clergy recovering from addiction to alcohol and other substances.  Ed believes the network is needed because the church is not very accepting of clergy struggling with addiction. “The church shoots its wounded,” Ed says. “This isn’t a problem clergy are supposed to have. So when clergy have it they don’t get treated very well.”

Treat and the rest of the Fellowship realizes that addiction is a problem among the laity as much as it can be among clergy. Because of this, Ed and other leaders in the Fellowship wanted to create a conference for laypersons in recovery.

Then Treat heard Minnesota Sen. Amy Klobuchar speak about opioids and he came to a realization. “I had a lightbulb go on,” he said. “There ought to be something for congregations understand addiction and how to deal with it. Right now, congregations are poorly equipped and they should be doing more.”

That became the spark for the Addiction and Faith Conference which had its first conference in 2018.  The Ministry Imagination Grant of the Minneapolis Area Synod helped with much of the costs of this conference and it was needed.  It was expected to be a small gathering of Lutherans, but people from six different denominations and 22 states swelled the registration to nearly 200 people. “We weren’t even marketing,” Ed says. “It tells you how much people are hungry for this.”

“According to a 2018 news article in the Minneapolis Star Tribune, the Centers for Disease Control and Prevention reports drug overdose is now the leading cause of death for those over the age of 50.”

The event included a number of speakers in the fields of addiction and recovery, including Lutheran pastor and author Nadia Bolz-Weber, who presented at the Friday and Saturday general sessions. Pr. Bolz-Weber understands these issues intimately having been sober since the early 90s.

The reviews from attendees were incredibly positive. Those who attended heard from addiction specialists and pastors in recovery. The conference gave faith leaders resources on how to deal with addiction, especially the ongoing opioid crisis. Faith communities have to be aware because the challenge is great. According to a 2018 news article in the Minneapolis Star Tribune, the Centers for Disease Control and Prevention reports drug overdose is now the leading cause of death for those over the age of 50.

“Everybody was just really excited to be in a community where addiction was looked at as a disease, as a health concern,” said the Rev. Sue Allers Hatlie, a clinical pastoral education (CPE) supervisor who attended last year’s conference. Allers Hatlie notes the conference is a way to help the pastors and other faith leaders she supervises to get an up close experience of how religious communities can assist those dealing with addiction. “By coming to the conference, the CPE pastors and faith leaders get the best of the best. They hear the best speakers and hear the very best, most current research. They look at what best practices are and how mental health and addiction relate.”

From her experiences at the 2018 conference, Allers Hatlie believes the event can change lives. “It’s been like a deeply personal transformational experience for everybody. People are developing their own awareness of how our patterns of behavior influence our ministry.”

THE ASTOUNDING SUCCESS of the first conference in 2018 placed a bit of pressure on the just-completed 2019 conference.  This year, the conference is taking place September 20-22 again at the DoubleTree Hotel in Bloomington. So far the conference is bringing in people from 31 states with 11 different denominations.  Author and activist Pr. Brian McLaren will give the keynote address and Sen. Amy Klobuchar will give a welcome by video. 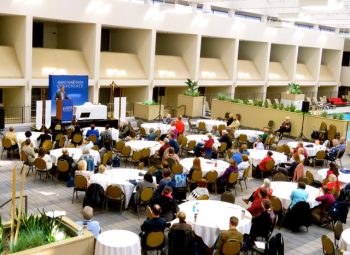 While this is still a lot of work for Ed, he does have help. Along with the Fellowship of Recovering Lutheran Clergy, the Recovery Ministries of the Episcopal Church are hosts for the 2019 conference.

Treat believes the work is something that God is calling him to do. He shares what happened after the 2018 conference: “When we finished last year’s conference, the FRLC leadership met and said, ‘That was amazing; we have to do this again.’ And they all look to me,” Ed remembers. “I said, I already have a full-time job. And they said, ‘There’s nobody else that can do it. This is God’s call for you.’”

The Bloomington pastor agrees and has done what he can to balance being a co-pastor of a congregation and putting together such an undertaking as the Addiction and Faith Conference.

Treat believes this conference is needed to help the wider church have compassion for those who struggle with addiction. He recounts the story of the prodigal son as a parable for the modern church when it comes to substance abuse. “I think it’s that whole challenge of the older brother and younger brother, the prodigal son story,” he says. “The older brother is in control of the church, and doesn’t really want the younger brother or he does allow the younger brother and it’s conditional. So we say that everyone’s welcome here but our body language is saying, ‘yeah, you aren’t welcome.’”

“Treat recounts the story of the prodigal son as a parable for the modern church when it comes to substance abuse.”

In a modern counterpart, Treat said one of his members once said that his ministry was going to fill the church with addicts. “I told that to a group of parents, nurses, at a meeting of community health workers. I said, “Somebody at my church is concerned that the church will be filled with a bunch of addicts,’ and about five heads turned up and chimed in, ‘They’re already here.’”

We are in bondage to sin and can’t free ourselves. In too many faith communities people can become like the older brother, not wanting to reach out to the prodigal sons and daughters dealing with substance abuse. But Pastor Ed Treat hopes events like the Addiction and Faith Conference will help the church look on with more grace than judgment because those who struggle with addiction are already in our pews.