Previous Next
Breaking Barriers to Grace 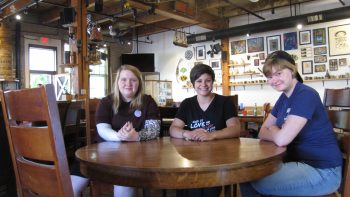 But, safe spaces where people can be who they are, including at worship, are still critical. That’s why there’s a need for Queer Grace, a ministry of Grace Lutheran Church in Northeast Minneapolis, started in 2017 by Pastor Emmy Kegler. Pastor Emmy saw a need that wasn’t being filled by other faith communities. “There are people coming out of evangelical, non-denominational, non-mainline traditions that maybe don’t easily step into mainline churches,” she explained, adding that parts of Lutheran worship, such as the liturgy or the lectionary, can be barriers to these people.

Pastor Emmy notes some LGBTQ people come from backgrounds where they have experienced religious trauma and perhaps a loss of faith. As a result, they are looking for a non-threatening place to experience faith again. The idea was not to create a separate worshipping community. “We wanted to have a situation where people could stay with their home church, whatever that looks like in the mornings, and be able to come to Queer Grace in the evenings and still have their need for LGBT community in a Christian context.”

Queer Grace hopes to be a safe space for people to reconnect with their faith, but that can be a challenge after experiencing religious trauma because of their sexuality or gender expression. “In the dimension of religious trauma, where people have been given really condemning or abusive visions of God, and what it means to be part of a church, [there is much to do],” Pastor Emmy notes. “A lot of the work that we’re trying to do is like, how can we reclaim scripture, church worship, and Christian community in a way that actually promotes safety, consent, accountability, and health?”

Pastor Emmy is clear that she and Queer Grace can’t heal trauma; that’s up to licensed therapists. But the worshiping body can at least make church a place where LGBTQ persons can feel a sense of emotional security. “I think what we’ve been able to create a space where things that might have triggered PTSD [post-traumatic stress disorder] or things that would have increased the religious trauma are significantly lower.”

QUEER GRACE CONSISTS OF Bible study, fellowship, and worship. The Bible studies and events like game night take place at Mojo Coffee in Northeast Minneapolis, with worship taking place at Grace Center for Community Life. “So we’ve gone to pride, we’ve gone to see movies together that are sort of on the topic; we took a whole crew to see the final show of Hedwig and the Angry Inch when that closed over at Theater Latte Da,” Queer Grace’s pastor offered.

For participant Libby Witte, Queer Grace is a place for people to talk about spiritual matters in a low-pressure atmosphere. “A lot of people who attend Queer Grace may or may not be really certain about what they believe, … they might believe different things. Some people aren’t necessarily religious at all, but coming together for a conversation about God in an open and honest and low-pressure way is very affirming for a lot of people.”

“Worship is sort of like the fixture; a lot of people might not make it to everything, but people are pretty good at making worship a priority.”

For its first six months, Queer Grace was just monthly worship. “People were hungry for God,” Witte said, and so Bible study and game night were soon added on.

But the people wanted more.

“We added a Bible study and game night and then other activity every Sunday evening, and people were like, ‘No, we still want more worship,’” Pastor Emmy said. “Worship is sort of like the fixture; a lot of people might not make it to everything, but people are pretty good at making worship a priority. This is clearly a tight-knit community that people are saying, ‘Hey, we want to see each other more,’ and we want to be doing it in the context of worship,” said Witte. So, Queer Grace currently meets twice a month for worship.

The service generally lasts two hours and at times includes a guest speaker. About 25 to 30 people attend the worship service every other Sunday. Interactive elements such as a prayer station help people engage the themes of the sermon.

The worship service tries to be a little less Lutheran except for one element: communion. “I think that’s probably where the Lutheranism really shows where I was like, we will have communion. And we will agree, right? We do not skip this,” Pastor Emmy stressed. When asked why communion was so important to the worship experience, she drew on her own background and what it means for those who might have left the church and are taking those first few steps to return to the church. “One of the things that drew me to Lutheranism is the consistent communion, at least in most church practice, but also, because people will come in the door, and this is their first foray back into the church, to be able to receive communion can be really transformative.”

Max Theiss, another regular attendee of Queer Grace, agrees. “Well, at first when I started coming I was like, I don’t want to have communion because I didn’t like earn it or whatever. So I just withheld it for myself for a long time. But then, I was like, it’s okay I can have this. I heard that one story about Saul stoning people, but if Jesus forgave him, it sounds like okay, this is for me.”

THE MINISTRY IMAGINATION GRANT program of the Minneapolis Area Synod helped Grace Lutheran provide needed funding for this ministry in several ways. First, Queer Grace is able to pay the coffee shop for using its space for game nights and Bible studies, allowing for a “safer” place for people to explore faith, which is important for people who have been hurt by the church. “You’d be surprised how big of a barrier that is for people to simply go into a church,” Libby said. “I brought people to game nights under the pretense that it’s church, but it’s not scary church, just at a coffee shop, just a bunch of friends.”

The grant has also allowed Queer Grace to pay for guest speakers. “That takes the burden off me because I’m a solo pastor,” Pastor Emmy said. “The more we can support, and bring in, other LGBT pastors in the Twin Cities, of which there are many, the better we can facilitate those connections between all of our communities, which is a really great thing. It’s visibility of other queer people leading in the church.”

“The Ministry Imagination Grant also paid for study Bibles. Pastor Emmy realized in spite of some the negative church experiences people might have gone through, they were interested in learning more about the Bible.”

The grant also paid for study Bibles. Pastor Emmy realized in spite of some the negative experiences people might have gone through, they were interested in learning more about the Bible. “We’re finding at Bible study that people want to open the Bible again, but especially for people who are coming to the table with any religious trauma, or, you know, any kind of condemnation or abuse background, it’s really intimidating. We invested in the New Revised Standard Version because I’m a big fan. The study Bibles are not overly academic, but are very grounded and real about the historical context for those scriptures.”

Queer Grace can’t remove the deep emotional hurts that people have experienced at the hands of the church, but it is helping to rebuild their faith anew in affirming way. Libby Witte has seen this happen. “I’ve seen so many people in this community who would otherwise not be a part of any church community, who have been deeply wounded by the church, who’ve sworn off God for good. And then saying, well, ‘I’ll probably make it to worship this week, see you there.’” Libby sees this as the church working in those out-of-the-way places that we might forget at times. “You know, the mission of the church is to bring God to the margins, right? Bring God to the people who aren’t seeing God, otherwise? I’ve seen this community do that kind of work time and time again.”

OTHER FAITH COMMUNITIES throughout the Midwest are looking at Queer Grace and have contacted Pastor Emmy about starting similar ministries that are contextual to their communities. “There’s been a couple of different communities that we’ve had conversations with that are more like our [situation], a city or significant population area that has affirming churches but wants to do outreach in some way and specifically create space for LGBT Christians.” There are also straight allies that come from communities where there are few LGBTQ religious leaders. “In some spaces, they don’t have any LGBT leaders and feel like this is an important thing to do and want to do it with integrity.”

What in store for Queer Grace in the future? The worshiping body will sponsor a Queer Health Fair in August that will focus on specific health needs for the LGBTQ community.

What else could happen? Max Theiss eagerly offered, “Maybe we can have worship like every Sunday?” Pastor Emmy looks over to read Libby’s face. “Libby’s looking at me like, ‘are we?’” Witte quickly responds, “I’m not saying nothing!” The three women share a laugh.

Pastor Emmy thinks weekly worship would be incredible, noting they are at a place with volunteers that they might be able to do it. “We would probably have to figure out something for pastoral leadership that would be a little more sustainable,” she said, thinking this would ultimately lead towards paid staff. “It’s amazing.”

Libby’s dream for the future is very concrete. “I think of a year from now, I’m thinking more people reached, more events done, different leaders so Emmy can be doing one thing and somebody else could be doing a different thing at the same time serving different pieces of the community.”

The gospel is preached. The sacraments are shared. Church is happening here at the margins.