Caleb Rollins has been working for Lutheran Volunteer Corps (LVC) for just a short month, but you would not suspect this by looking at him. The truth is, Caleb carries himself like a seasoned professional. His confidence in himself and enthusiasm about his work make him apt to be the program manager for the Twin Cities. 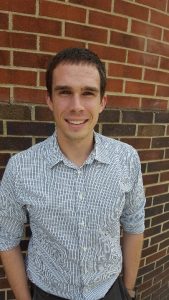 Headquartered in Washington, D.C., LVC is a non-profit that places young adults in cities across the country, like Baltimore, Omaha, and Minneapolis. In these many locations, volunteers work with other organizations that are deeply embedded in their communities, with the goal of furthering the mission of their organization and becoming better humans in the process. Although “becoming better humans” isn’t explicitly part of LVC’s mission, it seems to be a convenient byproduct of the program. Specifically, LVC fosters movement by individuals toward deeper commitment to equity and justice while living simply in community with their co-volunteers. This is something they’ve been doing for 40 years, accumulating 2,800 alumni in the process.

“Although ‘becoming better humans’ isn’t explicitly part of LVC’s mission, it seems to be a convenient byproduct of the program.”

In the mix of all this, Caleb has the title of program manager in the Twin Cities, where LVC started placing volunteers in 1991. He makes sure that things run smoothly on a day-to-day basis in addition to managing big picture plans. This can look like checking in with volunteers, strengthening and expanding connections with placement organizations in the Twin Cities, recruiting volunteers for the upcoming year, and anything in between.

BUT CALEB’S JOURNEY with LVC did not begin here. He himself was an LVC volunteer in Minneapolis in 2015-16. In his own words, “that [experience] has shaped my career path and where I decided to go.” LVC placed him with Trinity Lutheran Congregation, and the work he did there was transformative. Through volunteering at the congregation’s after-school program, Caleb cultivated his passion both for local-level service work and for Minneapolis. It was both of these passions that drew him back to work for LVC.

“LVC has a commitment to working against oppressive structures in a way that also pays attention to spirituality — that’s pretty appealing to me.”

After his time as a volunteer, Caleb moved to Washington, D.C., with his now-wife (who happened to be a fellow LVCer and housemate with Caleb) where they stayed for several years. During his first year on the East Coast, Caleb was intentional about staying connected with the LVC program; he chose to be a spirituality mentor for the next year’s volunteers — one of the many roles that support volunteers throughout their year of service.

While he took on this position, he worked at a larger nonprofit that was more distanced from the personal, local work that Caleb was used to. During this time, Caleb experienced a larger scope of what working in the nonprofit world can look like. Reflecting on his time in D.C., Caleb remarks, “that was sort of at the 50,000-foot level. So I wanted to return more to the local level.”

COMING BACK TO SEA LEVEL, Caleb has been excited by the opportunities his new job with LVC has given him. Being a former volunteer gives him a personable perspective when checking in with current volunteers. He comments that “It’s been really great to get to know the volunteers in the Twin Cities: to be a part of some of the conversations they’re having around their dinner tables, and just sit back and learn from them and learn with them.”

Building relationships has been a central part of Caleb’s job, just as it is a core value of LVC. For Caleb, this can take place on an organizational level as well. LVC has deep ties with the ELCA; in the Twin Cities specifically, LVC currently has nine volunteers working in five Lutheran churches and organizations, including the Minneapolis Area Synod office. 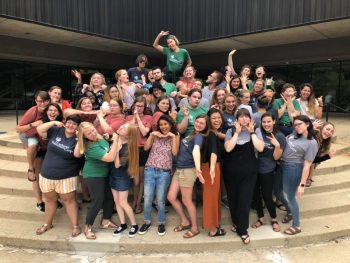 The 2019 LVC volunteers at the national orientation in Chicago

This foundation with the ELCA has great potential for both for LVC and the Lutheran church. LVC connects young adults with their communities — whether or not it is directly through the Lutheran church — and enables them to make strong relationships and make positive changes in their communities. Caleb believes that engaging young adults in this way is a good thing, that “[There are] young adults, maybe not participating in the traditional ways that we’ve thought about the church, but they’re there in those spaces.”

“I’m looking forward to building relationships with ELCA congregations in the area.”

As LVC continues to work with volunteers “in those spaces,” Caleb sees the organization continuing to deepen its already existing relationships and broadening its presence in the Twin Cities area. As the new program manager, he is in the perfect position to do so. He optimistically comments, “I’m looking forward to building relationships with ELCA congregations in the area.”

LVC is in the middle of celebrating their 40th year of serving communities on the local level. In the summer, they hosted several events at baseball games, bowling allies, and breweries. To celebrate past and present volunteers, LVC is hosting a 40th Anniversary Commissioning and Celebration in mid-September. If you or someone you know is interested in being a part of this legacy, Caleb would love to connect with you or someone from your church about how to help support and recruit LVC volunteers.