Previous Next
Confirmation, context, and community

In 1908 a delegation of 25 young Lutherans at Augustana Lutheran Church in South Minneapolis founded Messiah Lutheran Church, with the goal of providing English-language services for newly arrived Swedish immigrants. With the help of financial support from a synodical Ministry Imagination Grant, these two small congregations, 111 years later, have partnered together to serve young people in their community through faith formation and confirmation programming. 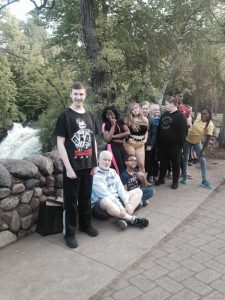 Pastors Bill Russell (Augustana Lutheran Church) and Tom Gustafson (Messiah Lutheran Church) have attended the same text study every Tuesday for a number of years, and though they knew of their congregations’ intertwined histories, they had not found effective ways for the two communities to partner together. However, in 2018 the two pastors began to discuss a vision for shared confirmation ministry and subsequently applied for a Ministry Imagination Grant to fund the creative endeavor.

“We said, ‘You know getting our two programs together we might find some strength in numbers’,” said Pastor Gustafson. “And we thought, it’d be great to get out of town for a retreat or to use this particular curriculum, but it might be out of our reach. But hearing about the Ministry Imagination Grant was just an answer to our prayer.”

This creative partnership envisions confirmation and faith formation taking place within the context of community, centering relationships and service as the vehicles for ongoing learning and discernment. Furthermore, the building of relationships across the two communities has added a powerful dimension to the learning and service opportunities.

SINCE THE FOUNDING of Messiah Lutheran Church in 1908, the two congregations have gone through a rich history of growth, learning, and transformation. Now, the two congregations find themselves in very similar situations. Both Augustana and Messiah serve similar contexts in the West Phillips and Ventura neighborhoods, respectively. Both moved out of historic church buildings and find themselves now worshipping and gathering in spaces that house community services and non-profits: The Center for Changing Lives houses Messiah, and Augustana gathers at Community Emergency Service.

“We like to say that our mission didn’t fit with our building, so we moved into the food-shelf building where we are now,” said Pastor Russell.

“In 1908 a delegation of 25 young Lutherans at Augustana Lutheran Church in South Minneapolis founded Messiah Lutheran Church, with the goal of providing English-language services for newly arrived Swedish immigrants.”

As the two congregations bring confirmation students together for learning, they do so rooted in these contexts and communities. The partnership has also created a more diverse confirmation program for both congregations, connecting students of color at Messiah with Augustana’s predominately white confirmation class.

The confirmation program is always seeking ways to hold conversation and space for reflection about the role of faith in school, family, and neighborhood. In early December, the West Phillips Neighborhood was the site of a tragic murder-suicide, which sent shockwaves throughout the community and sparked conversation at the following week’s confirmation class.

“In our neighborhood we had this terrible shooting and that has an impact on our congregations,” said Pastor Russell. “But confirmation can be a place to process that trauma and pain. So, the topic [last week] was baptism, but we said, ‘Let’s talk about how we make sense of something so terrible.’”

BOTH PASTORS Russell and Gustafson see confirmation as a foundation building ministry, offering young people and all people of faith something to stand on in their daily lives. 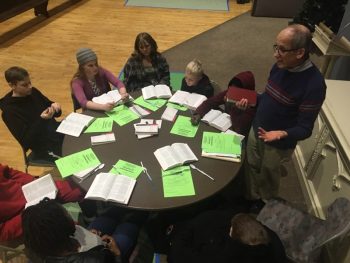 “You’re loved, and you’re valued, and you’re never alone…that’s what I think confirmation sings out to all of us,” said Pastor Gustafson.

“We want [the confirmation students] to fall in love with Jesus in new and deeper ways,” added Pastor Russell.

The confirmation program meets every Wednesday evening, rotating between the two locations. Each week the class shares a meal together, made possible with funds from the Ministry Imagination Grant, and spends time in conversation and study. The curriculum is largely written and organized by Pastors Russell and Gustafson with help from study aids like Collaborate from Sparkhouse.

In 2020 the congregations hope to plan and organize a retreat for the confirmation students at a Lutheran camp. Pastors Russell and Gustafson have been in conversation with Dave Scherer, better known as Agape, a Lutheran rapper and storyteller, about helping to lead a process of worship service creation that the confirmation students will be able to bring back to their home congregations.

BOTH AUGUSTANA AND MESSIAH also have adult Bible studies that meet on Wednesday evenings which overlap with the confirmation class, providing a time for intergenerational community building. Adults from both congregations have connected with the students and are always quick to offer words of support and encouragement.

Wonderfully, the partnership that began with two small groups of middle and high school students gathering for confirmation, has also begun to extend to other aspects of congregational life. The two congregations have since held a joint council retreat, spent time worshipping together during Lent, and collaborated on God’s Work Our Hands Sunday.

“It feels like we’re at a tipping point of having this take hold in the hearts and minds of the kids and the congregations,” said Pastor Russell. “It could really become more engrained within the community. I hope it tips towards more community, more connection.”

“It was because of kids that Augustana blessed these 25 people out the door to start an English-speaking congregation and now, 111 years later, it is kids that have brought the two congregations back together.”

These two congregations, serving separate contexts for the better part of 100 years, now find themselves reconnecting and finding ways to do innovative and live-giving ministry together with help from the Minneapolis Area Synod and a Ministry Imagination Grant.

“It was because of kids that Augustana blessed these 25 people out the door to start an English-speaking congregation and now, 111 years later, it is kids that have brought the two congregations back together,” said Pastor Gustafson. “In a way, the Imagination Grant has really brought these congregations together.”

This shared confirmation programming between Augustana Evangelical Lutheran Church and Messiah Lutheran Church, fueled by dollars from an imagination grant, has sparked a new season of collaboration in the lives of the two congregations, extending a powerful invitation into life-giving Christian community.