Previous Next
Embodying the liturgy

On Sunday mornings at Holy Trinity Lutheran Church, Pastor Ingrid Rasmussen often shakes the hands of congregants as they leave the sanctuary and takes a moment to talk with individual members. Regularly these conversations include discussion of the worship service itself, and it was in these conversations that Pastor Ingrid began to hear a consistent theme emerging. 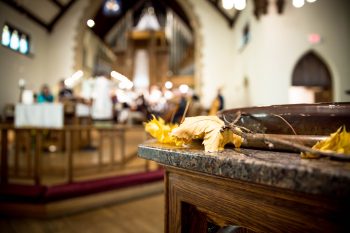 “I would hear from congregants that they had particular responses to pieces of settings that we were using, or they expressed a desire for a wider set of images or metaphors in worship,” said Pastor Ingrid.

“So those sung liturgies live in my body; they are embodied for me.”

Along with these conversations, congregations across the ELCA began to engage with a newly drafted social statement which became the recently adopted “Faith, Sexism, and Justice: A Call to Action.” This social statement offers a theological response to patriarchy and systemic evils that target women and girls based on sex, gender, or both.

It was this congregational energy for more expansive language in worship, and the ELCA’s call to engage with the newly drafted social statement, that moved Pastor Ingrid to write a Ministry Imagination Grant (MIG) through the Minneapolis Area Synod, to commission a liturgy setting with expansive language for God, focusing especially on the need to imagine God outside of masculine frameworks.

THE DEVELOPMENT PHASE OF the grant began in the Fall of 2018, with representatives from the partner organizations gathering to read “Faith, Sexism, and Justice” together, and to begin having conversations within their own communities about what expansive language means in their particular context.

After a year of meeting and study the group wrote a case statement together as a way to draw their ideas, hopes, and learnings together in one document that could be used as a platform from which to create a new liturgical setting and to set the frame for the work ahead.

The case study provides a rationale for the development of new liturgies, saying:

One of the practical hurdles we face in raising up generations of believers with expansive imaginations are the liturgical settings found within our primary sourcebook, the Evangelical Lutheran Worship [ELW] hymnal. There is richness to be found within its pages, to be sure. The liturgical settings, however, are dominated by masculine language and imagery … and masculine pronouns. The imbalance is stunningly clear; setting three alone carries thirty masculine references and zero references to the feminine. (emphasis mine)

“Bishop Ann [Svennungsen] often said when she was talking about the creation of the [“Faith, Sexism, and Justice”] social statement, summarizing Elizabeth Johnson, that ‘There won’t be justice for women until we can imagine God as feminine, God as woman,’” said Pastor Ingrid. “There is this sense that the way we image God is directly connected to our understanding of justice in the world.”

So, what is it about the liturgy that makes the need for expansive language so important?

“Only having one set, one way, is limiting. And that’s kind of what we have in the ELW,” said Zach Busch, Minister of Worship and Music at University Lutheran Church of Hope. “All the texts in those settings, even though we have 10 settings, are different musically, but the texts for the most part are all the same. And that’s limiting to our imagination for God.”

“It’s not just the language, there are these theological underpinnings,” said Pastor Jen Nagel at University Lutheran Church of Hope. “As Lutherans we are saturated with the theology of how we understand God, but there is theology that is wider than what we have [in the ELW]. If we look at our global partners and within the ELCA, there are a variety of angles. … But sometimes one theology dominates and that limits the imagination for everybody, … or other people can’t connect to it. We need to hear about God from all these different angles.”

IN THE LUTHERAN TRADITION, the liturgy is understood as the work of the people and is perhaps the central way that our congregations publicly and communally say who God is and how God is active. In this way the liturgy is in fact a vital tool for teaching and proclamation as well as formation.

“I’m a church organist daughter, so the sung liturgy has always been a big part of my life,” said Pastor Ingrid. “So those sung liturgies live in my body; they are embodied for me. And our hope as a group is that by creating a setting, rather than piecemealing parts together, we leave open the possibility that these new images come to live in our bodies in the same that the settings we’ve been using have come to live in mine.” 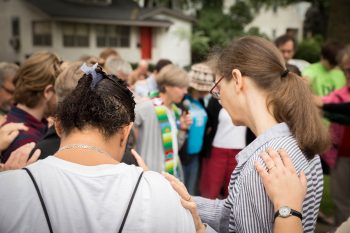 One of the emerging tensions that has arisen in the group’s work has been around the often subjective interpretation of what “expansive language” means. Intentionally, they have pressed beyond language that remains tied to traditional binaries (man/woman, father/mother), honoring women and girls but attempting to resist reinforcing a binary that can be harmful to many. They have even explored moving beyond person-centered language, imagining God in the language of creation, action, and emotion.

“One thing we’ve come to know in the group is that … expansive for one might feel limiting for another,” said Pastor Ingrid. “By the end of this setting, I hope that there might be pieces of it that don’t resonate with me, but resonate with a neighbor, and I expect that to be true. And in that way the setting can honor that difference is okay in the church.”

“It was this congregational energy for more expansive language in worship that moved Pastor Ingrid to seek funding to commission a liturgy setting with expansive language for God, focusing especially on the need to imagine God outside of masculine frameworks.”

Having done a year of study and imagination, the group now hopes to commission a poet and musician to begin the process of crafting a new liturgical setting. Though this setting is being created with the MIG’s partner congregations in mind, they hope that this might become a resource for ELCA congregations everywhere.

“About a month ago, my husband took our two-year-old home after church, and she began to sing the Agnus Dei, Lamb of God,” said Pastor Ingrid. “What we’re singing in that space is already coming to live in her body, and it’s already shaping her imagination. So, it’s not only about how these things have formed me, but how do I witness the elements forming the imagination of a child. It’s a daily reminder for me of how we are shaped by what the church gives to us.”

It is this deep understanding of the impact of our church’s liturgy on the formation of its people that has moved Pastor Ingrid and her partners to birth something new and imaginative and theologically rich. In this way their work will continue to extend a gracious invitation into life-giving Christian community, ensuring that we all might hear God’s word for us in the work of the people.