Providing relief when a disaster’s impact is long-lasting

Hurricane Harvey struck parts of Texas and Louisiana in 2017, and over the past two years, St. Philip’s Disaster Relief has made five trips to Conrow, Texas, to assist in long-term recovery. Mike Anderson and Renee Johnson, the relief program’s two coordinators, and 12 other volunteers embarked on the team’s 76th overall trip on November 9, 2019, arriving in Conrow on the afternoon of November 10.

The idea to create a relief team came after Hurricane Katrina in 2005. After seeing the need for help, members of St. Philip’s Lutheran were confident that they could pull together a team to address some aspects of the overwhelming need. Anderson, a participant since its inception, says “The spark was wanting to help people.” The team set out on their first trip to Mississippi not knowing what ways, or to what extent, the program would develop.

“We’ve never turned anybody away; we have a job for anybody and everybody.”

St. Philip’s Disaster Relief (SPDR) assembles a slightly different team every time they travel. Anderson speaks from personal experience: “We consider ourselves semi-skilled in [rebuilding].” This rebuilding is meant in a literal sense; they rebuild homes affected by natural disaster. There are already programs in existence that assist with people’s immediate needs after a natural disaster, like providing food and shelter and treating injuries. However, this is not the role of SPDR. Its purpose is to assist specifically in long-term recovery, focusing on two to three years after a disaster has occurred.

After the team decides where there is a need it can address, leaders send out the word to skilled and non-skilled workers alike. There’s normally a good mix of both on every trip. Mike proudly states, “We’ve never turned anybody away; … we have a job for anybody and everybody.”

The team needs to consist of experienced crew leaders and people who can support them. The crew leaders not only have the construction skills to know what needs to be done, but they also have the people management skills to help the team work together.

LUTHERAN DISASTER RESPONSE (LDR) plays a large roll in facilitating SPDR’s work. Anderson makes sure that he personally makes contact with its national director, a role several different people have filled over the years that the relief team has been active. “[LDR] is a go-between between us and the programs in the community.” For example, LDR connected the relief team to Lutheran Social Service in Oklahoma and Texas a number of years before Hurricane Harvey, and LSS helped connect the relief team to the work they are now doing in Conrow.

SPDR is intentional about making sure that their work goes where it is needed most. Mike says, “The homes we work in have been case worked by local [programs]” to determine which individuals “are deserving of our time and money.” Before the team arrives, case workers determine who in the community is in greatest need. The individuals that SPDR helps do not have the means to rebuild on their own, meaning they don’t have the money to rebuild their homes, or they aren’t physically able to do so, or any number of other reasons.

“St. Philip’s Disaster Relief is a ‘signature ministry of the congregation.’”

Although this is the fifth trip that the team has made to Texas after Hurricane Harvey, returning to sites multiple times isn’t abnormal. “We’ve been called boomerangs because we keep coming back,” Mike remarks. However, this particular trip has a very specific mission. Normally, the team works on five or six houses, preparing them to be re-entered by the families they house. However, this time they returned to work on one specific home. The team’s last trip to Texas was on October 5 — about a month before the most recent trip. But when the team realized that they could help a family re-enter their home before the holidays, 12 of the 14 team members decided to return for another trip.

ST. PHILIP’S PASTOR Matthew Flom says that SPDR is a “signature ministry of the congregation.” The church is dedicated to outreach, both in their immediate community and beyond. St. Philip’s is Pastor Matthew’s fourth call, and he is amazed by the amount of outreach that this church participates in. He says, “I’ve never been part of a congregation that was this highly focused on serving the community and larger world.” In addition to their disaster relief team, St. Philip’s outreach consists of a clothing and food shelf, a community garden, and a coats-for-kids program. 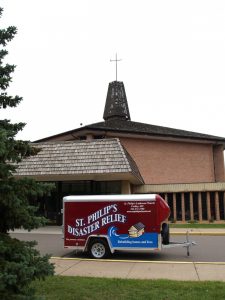 Both Pastor Matthew and Mike Anderson are impressed with the draw of the relief team. Over 160 different people have gone on trips with St. Philip’s Disaster Relief since 2005. There are normally one or two new people per trip, and on average, 60% of the volunteers are from St. Philips, and 40% are from elsewhere in the community. A few people come from other states as well, including Michigan, Colorado, and Iowa. According to Mike, “St. Philip’s created the vehicle” for people to do this relief work, and it attracts people who have the desire to help.

SPDR’s impact extends even further than those affected by natural disasters. The team has set a good example of how frequently and efficiently churches can engage in disaster relief efforts — so much so that they have drawn the attention of other churches who want to start similar programs. “The word is getting out, … [and] the program is growing,” says Mike. On this trip, they’re working to help the Episcopal Diocese of East Texas start their own disaster relief program.

“We’ve been called boomerangs because we keep coming back.”

The disaster relief team obviously does good work in the communities it serves, but Pastor Matthew notes that it serves the congregation as well. “People grow spiritually” on these trips, he says. They return to the congregation as better leaders and community members, empowered by the Christ-centered work that they do.

St. Philip’s Lutheran Church is hosting a fundraiser for the team in February, consisting of a lasagna dinner and a silent auction. “Financial support keeps us going,” says Mike. They could not do what they do if it were not for the support from the congregation, the community, and friends of the relief team.