Sit at the (Longer) Welcome Table

Previous Next
Sit at the (Longer) Welcome Table

A vibrant Minneapolis neighborhood surrounds Mount Olive Lutheran Church. Like the shops at the renowned Midtown Global Market, filled with food and goods from every corner of the globe, the West Powderhorn Park neighborhood is remarkably diverse. “The community that Mount Olive is placed in is vibrant and diverse, but also economically varied,” said Anna Scott, a member and former staff person of the congregation. “[We] seek to live our lives in worship and service, both in and out of the building on the corner of 31st and Chicago. We see our whole neighborhood as our community and the face of Christ in every person of that community.”

That economic diversity is tangible in the many people who don’t have access to financial institutions such as banks when they are in need of loans. Because loans are often not easily available, these individuals often rely on payday lending businesses which tend to have exorbitant fees – an expense that puts further stress on low-income populations. And three payday lending businesses operate between Lyndale and Hiawatha Avenues along Lake Street, according to Scott.

Longer Table Lending was created by the members of Mount Olive to help people obtain loans at a low cost. “Our mission for this program is to offer an alternative product to payday and abusive lending practices for individuals and families in a financial emergency who have the ability to repay,” Scott explained. “We want our community to have safe, fair options when in need, and to [offer alternatives to businesses that] profit off of people’s hardship.” Mount Olive received some foundation support for the Lending Table, as well as funding from a synodical Ministry Imagination Grant, a program created by the Synod Council using legacy proceeds from the sale of Lutheran Church of the Reformation (formerly in St. Louis Park) to fund new, enhanced, or expanding ministries looking to share the gospel in innovative ways.

“It’s all too common that dreams can lay dormant when resources seem scarce.”

Pew Charitable Trusts and other researchers report that 12 million Americans currently use payday lending each year, spending a shocking $520 in fees to borrow $375 repeatedly. Scott notes that the Minnesota legislature is considering legislation to cap interest rates on payday loans at 36 percent, which she believes is a good step. But Mount Olive opted to provide an alternative financial option to borrowers. “We want to be a part of creating a healthy and just economy to these abusive options for those that are most vulnerable,” Scott said.

UNTIL A MONTH AGO, Scott was the coordinator for neighborhood ministry at Mount Olive. She was charged by the congregation with direct care of vulnerable people, including helping with emergency financial assistance and fare for mass transit. “I had the opportunity to speak with people in difficult situations who had a range of needs, but there was always a common thread – money,” Scott recounted. “People needed access to cash, but because of their circumstances, they didn’t have it.” These individuals didn’t qualify for existing bank options, and their circumstances didn’t fit neatly in the boxes that charities often demanded, she explained.

Carol Martinson, a four-year member of Mount Olive who joined because of its commitment to its neighborhood, explained that the governing body of Lending Table had to struggle through identifying what criteria would be used for evaluating the necessity of the loans. Would funeral expenses qualify? What about utility bills? “Finally, we realized that when people are in crisis, they just don’t have the resources,” Martinson explained. “As Christians, we’re not going to judge. It’s not about people managing money better; it is about vulnerable people experiencing emergencies.”

“Mount Olive received some foundation support for the Lending Table, as well as funding from a synodical Ministry Imagination Grant.”

Typical payday lending businesses often charge interest rates of more than 300 percent interest, but Longer Table Lending will not charge interest. It will offer loans of up to $500 for clients to use for such emergency needs as housing, transportation, utilities, or funeral expenses. Clients have to be a Minnesota resident with an income and a bank account, but who, for some reason, can’t qualify for a traditional bank loan. “We have set out to create a safe, dignified product for our neighbors that they can use and pay back, so they can move ahead knowing they are supported by their community,” Scott said. 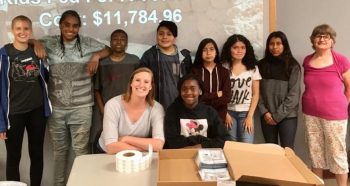 A neighboring congregation had tried a slightly different approach. Exodus Lending, a ministry began by nearby Holy Trinity Lutheran Church, refinances existing payday loans. It “buys” the principal of the loan from the payday lender and then charges no interest for the repayment of the loan by the borrower. In contrast, Lending Table offers originating loans. Scott explained that the leaders of Longer Table decided that it could work on the front end so that people can bypass predatory lending altogether.

“We do ask people to consider one additional payment [beyond fulfillment of loan repayment],” explained Martinson. “This is another way we can regenerate resources for the loan fund.”

Mount Olive will use its Ministry Imagination Grant to fund the loan pool that will get Longer Table off the ground. Scott believes the grant also helps Longer Table Lending serve as a witness to other congregations to assist them in listening to the voices of the community, as well as the voice of God. “It’s all too common that dreams can lay dormant when resources seem scarce,” Scott says. “Sharing the abundance of the grant has breathed life into our dream to provide the ministry of Longer Table Lending in a more impactful way than we knew was possible.”

The vision of Mount Olive Lutheran is to always be “in the presence of God, being the presence of God.” Through the Ministry Imagination Grant, Longer Table Lending seeks to embody God’s presence in the community where financial needs are met in a just manner.