So, You Think YOU Have Questions

Previous Next
So, You Think YOU Have Questions 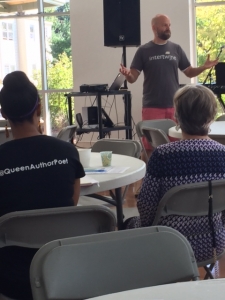 Mike Rusert comes by church planting naturally. When his dad, Bob Rusert, started a new congregation in Monticello, Minnesota, Mike learned that “we built community out of our house, and the church became my family and friends.” He figures that when it comes to having deep understanding and love for new-start ministry, he “was doomed from the beginning.”

But Mike’s primary memories, which included door-knocking the neighborhood around what would become a new start congregation, meant that he felt “ownership” that comes with setting up the chairs every Sunday. Helping alongside other volunteers, he realized quickly that everyone involved was essential in making “church happen.”

Now Mike is back at it, this time in Northeast Minneapolis, a rapidly changing part of the urban metro with concentrations of young people and young families who come without much of a sense of church participation … and some wariness as to what churches are all about. Many simply never had connection to faith community; many more have had bad experiences with congregations when they asked questions about faith, science, sexuality, or justice (including navigating the messiness of gentrification).

“This church planting thing actually chose me,” Mike reflects. With his wife Patti just beginning a Doctorate of Nursing Practice program in the Twin Cities, he knew that the Twin Cities would be home. But no doors for a traditional church setting opened. “So God opened a giant door” with the opportunity to start something new – with people who wouldn’t walk in the door of any of the established congregations in Northeast.

That’s how Intertwine NE came to be.

WHEN A SMALL GROUP of people willing to try something new got together, the ideas started flowing. As they discussed the launch of this experimental congregation, images and identity became significant. Mike hoped that they would name themselves after a native plant, demonstrating a rootedness in the community that portrayed a sense of place, a healing quality, and an environmental ethic. The image of being “connected” became strong.

At Jacob’s Well, a synod congregation originally started by Bethlehem Lutheran Church of south Minneapolis, rope was a definitional icon. The three cords that weave through a rope and give it strength are connection to God, connection to ourselves, and connection to community, Mike explains. The image draws on the vision that “Though one may be overpowered, two can defend themselves; a cord of three strands is not quickly broken” (Ecclesiastes 4:12).

Lindsey Graff, one of the core group of launchers, suggested “twine” as an image. Pretty soon it became Intertwine, noting that the last two letters of that name are NE (the acronym for northeast), connecting it even more deeply to its place. “It was the perfect name, creating space for people giving up on church, who are spiritual but not religious,” Mike adds.

How does the church meet the needs of such people, Mike wondered. “Jesus was always listening; he told stories, and he offered space for people to tell him what they were experiencing. He honored their stories.” So, Mike believed that this new venture of Intertwine NE must be a space for sharing story and listening to each other.

“Intertwine NE is connecting with people who are skeptical about church,” explains the Rev. Deb Stehlin, the synod’s director of evangelical mission. “The launchers … have a hunch that stories, questions, and compassion can open people to the transforming love of Jesus.”

At the initial worship service of Intertwine NE, held at the East Side Neighborhood Services building, participants sat around round tables to facilitate informal discussion about the day’s theme: “Once Upon a NOW: ?s Not Answers.” After sharing an informal homily/reflection, Mike encouraged those gathered to share stories together about questions concerning themselves and their experiences of faith and life. 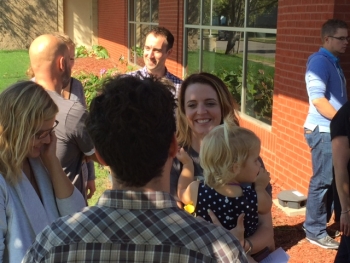 “with a different type of relationship with God than a lot of people,” so a church that stresses questions, not answers, is just what she is looking for. Laura, a music major from Augsburg College who had been leading the contemporary worship at Nativity Lutheran Church in St. Anthony, Minnesota, was just realizing that she was ready “to do something big and scary.” Aware that church wasn’t working for a lot of her contemporaries, she decided that an experiment like Intertwine was a good fit – for her and, potentially, for others.

When Mike approached her, they talked for three hours about faith and passions “and the rest is history, as they say.” For Laura, church had included a lot of shaming while she was growing up; she knew she didn’t want that again. Her experience at Augsburg had shown that faith didn’t have to elicit that kind of response. And a church that encourages curiosity and exploration and challenge is re-igniting “a hunger to be part of a community with people who are different than me.”

In many ways, yoga had been the source of community that exhibited tolerance and inquisitiveness. Laura felt a spiritual connection there. And for Mike, yoga classes and beer pubs (even though he is three years sober) became the indicator of a possible future site for this “synodically authorized worshiping community.” And Laura believes that she “can enjoy reclaiming words like God and sacrament and Jesus; words that had been so loaded with baggage” before.

MIKE IS CLEAR: He’s not “the church to young adults.” He doesn’t simply want to answer the question of where the millennials are. He’s looking for people who want a deeper conversation about a relationship with Jesus; people who don’t fit in a more conventional congregation. “But, that could be [a person’s] co-worker or their grandkids,” he emphasizes.

Intertwine is looking for people who want meaningful community, who are provoked by questions, who are active in confronting privilege and racism, who can live with an environmental ethic. He is pretty sure that this new start congregation can offer a unique experience to people attracted to those goals.

Mike knows that there will people who question what he is doing, who believe church is more about answers than questions. So, part of his calling as a mission developer is to translate his ministry to those who say “that’s not church.” He hopes that even there he can ignite curiosity without judgment. “No one needs to fear what we are doing with Intertwine.

This new worshiping community could use the prayer support, according to its mission developer – people, too. “And we want to get beyond the inward look [of the church] that is about fear of what is going to happen to faith in the future,” In Mike’s opinion, openness to questions will help move the church from a focus on scarcity.

And, speaking of scarcity, financial support has always been and continues to be essential to new start congregations. These worshiping communities are not viable for several years. Hence, the synod’s commitment to New Starts Sundays in October.

But, with support, the future is indeed bright.

Mike says his daughter Etta is already becoming sermon fodder for him. She loves to sing with her church. And, though she is too young to help set up chairs, on launch day she was at the door with her community, greeting all those who attended.

It appears another generation of Ruserts may be doomed! 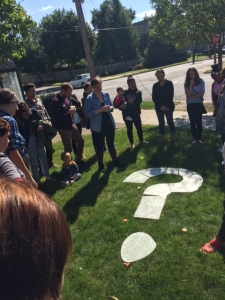 Intertwine NE and Mike Rusert can be reached at mwrusert@gmail.com or 763-370-8938. Intertwine NE’s next worship service will be held at East Side Neighborhood Services, 1700 2nd Street NE, Minneapolis, on October 16 at 10:00 a.m. The theme will be “Once Upon a Now – Mad of and Moved by Story.”