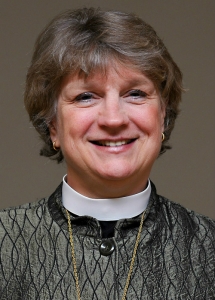 Bishop Ann Svennungsen was re-elected to a second six-year term on May 5, 2018 by voting members of the Minneapolis Area Synod Assembly. Her original election was an historic vote, making her the first woman to serve as bishop in any of the ELCA’s six Minnesota synods.

Rev. Svennungsen has been a leader in congregations and church-related organizations for more than 30 years. Following graduation from seminary in 1981, Svennungsen pastored congregations in Iowa City, Iowa, and Edina, Minnesota. In 1996, she became senior pastor of Trinity Lutheran Church in Moorhead, Minnesota, a 3,700-member congregation and—at the time—the largest ELCA congregation to be led by a female senior pastor. In her years of parish ministry, Svennungsen mentored several younger pastors and developed Trinity’s Transition into Ministry Pastoral Residency Program, funded by a $750,000 grant from the Lilly Endowment.

In 2003, Svennungsen was named president of The Fund for Theological Education, a national, ecumenical organization devoted to raising up the next generation of excellent and diverse ministers and scholars, annually awarding $1.2 million in scholarships and other support.

From 2007 to 2010, Svennungsen served as president of Texas Lutheran University in Seguin, Texas, where she led development of a comprehensive new strategic plan. Most recently, she was interim college pastor at St. Olaf College and held an appointment as Resident Scholar at the Collegeville Institute for Ecumenical and Cultural Research at Saint John’s University.

Married to Rev. Dr. William Russell, a Reformation specialist, they are parents to Sarah (Dan) Karlgaard, John Russell (deceased), and Mary (Geoff) Koslig; and grandparents to John and Annika Karlgaard.